In a prior blog post we described a school-wide community initiative, developed in New Orleans, called The Biggest Winner Math Challenge that produces gains in math scores by engaging and focusing students on individualized goals. The Biggest Winner Math Challenge campaign was launched in 2 elementary schools within the Algiers Charter School Association(ACSA) network.  ACSA is the largest charter association in Louisiana.

Out of ACSA’s 4 elementary/middle schools, 2 schools were used to test and 2 schools served as control schools used for comparison. For the past 2 years Dwight Eisenhower Academy of Global Studies charter school has been the campaign pilot.  A 1 year pilot at McDonogh #32 charter school in New Orleans has also been completed.

The pilot, partially funded by a School Improvement Grant (SIG), was designed as a research study of the outcome of a “Change Campaign” strategy that combines personalized and blended learning, learning anaytics, educational technologies, social media and  ongoing student feedback.

This week the Louisiana Department of Education released the school report cards for 2015, the first year of PARCC testing in K – 8 public schools.  The results of the pilot are shown in the table below.

The Biggest Winner Math Challenge pilot schools had both score stability (McDonogh #23) and growth (Eisenhower Academy).  McDonogh #32 remained a D school during its 1 year pilot.  However, Eisenhower went from a D to a C school in the second year of its pilot primarily because of the school-wide math initiative.  The work of many educators came together to create a culture of achievement within these schools.  Innovations were trialed, modified if needed and monitored.  Learning was personalized using appropriate technology.  And student engagement was considered a critical factor for success.  The result  for Eisenhower clearly shows (data tables) that the school’s math initiative was the basis for the change in score from D to C and one of the causes for student performance gains across grades, especially in 8th.

The Biggest Winner Math Challenge is a “branded campaign of school change” that involves the use of stakeholder surveys, a deep dive review of  historical school data and the establishment of personalized learning strategies with technology supports for classroom instruction.  The campaign was developed on-the-ground  by a team from Ed Inquiry (Boston and New Orleans) during the transition to the much more rigorous Common Core standards.  For more details on the campaign and its development click here.

The campaign is focused on growth and progress by either closing math skills gaps that many students have or providing easy access to more accelerated learning.  The key is the educational journey is individualized to the student.  Students with identified skills gaps can grow by closing them.  Students that are generally on grade level can hone their skills.  Students that are beyond grade level can be challenged and remain engaged.  When individual personalized growth is the target, everyone (no matter how far behind or how far advanced) has the possibility of “winning.”

Using a series of diagnostics, The Biggest Winner Math Challenge creates an individualized education path based on the resources available to the specific school.  As the The Biggest Winner Math Challenge evolves within a school,  enhanced professional development focuses on the use of instructional data, learning analytics and technologies which are appropriately weaved into the campaign. The campaign aims to  “deliver success” to students at all levels no matter how far behind grade level or how far ahead.

Did the Math Challenge help students who struggle academically? Yes!

Louisiana School Report Cards include a section that allocates “bonus” points to a school’s scores based on the growth that occurs in students that have been “struggling academically.”  At the elementary and middle school level, schools can earn up to 10 progress points for making significant progress with students who were non-proficient in English language arts (ELA) or math, but who made significant progress.

Both Eisenhower and McDonogh #32 had outcomes much higher than the state and district on the movement of formerly struggling students in math as can be seen from the highlights below. In both schools, about 2/3 of students that were below grade level made sufficient growth to meet the state’s expectation of progress. Both schools were Biggest Winner Math Challenge pilots for 2015.  For Eisenhower, these bonus points pushed the school from a D to a C!!! 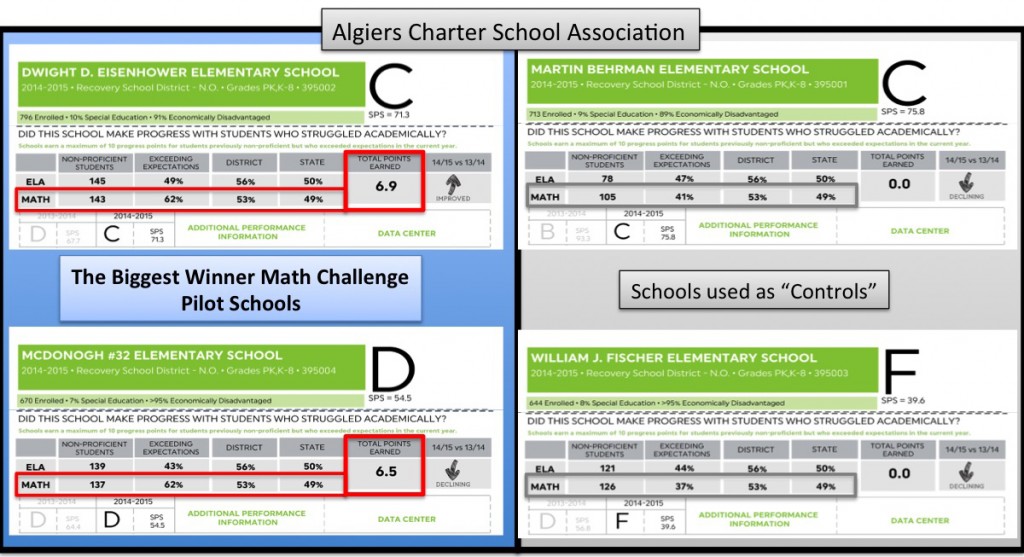 The Biggest Winner Math Challenge provides opportunities for growth no matter how advanced a student is.  As can be seen from the graph below, the graduating 8th grade of Eisenhower Academy (shown in the last dark purple column) jumped more than 26% in the Math Mastery or above category from their prior year in 7th grade.  39% of Eisenhower’s students achieved a level of math mastery or above, on grade level with students that took a similar PARCC test in Massachusetts, New York and elsewhere.  They were prepared for success in high school. 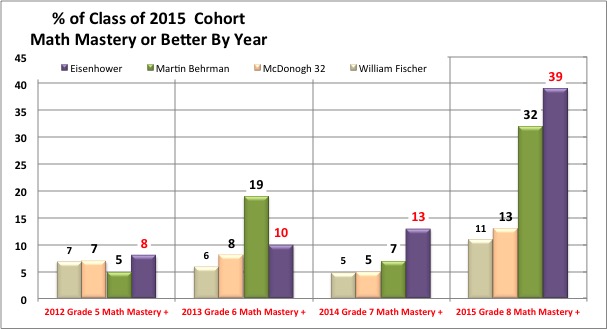 Eisenhower 8th Grade math growth to achieve 39% from 7th  to 8th grade was greater than the growth of Behrman Charter School, known to be one of New Orleans’ top performing schools.

These Eisenhower Academy students participated for 2 years in the pilot and  “rose to the challenges” offered in the Biggest Winner Math Challenge.    These students evolved with the program and in the second year used technology, tutoring support and their own sense of internal competition to win and grow.

Is Eisenhower’s growth comparable to other schools in New Orleans? Yes! 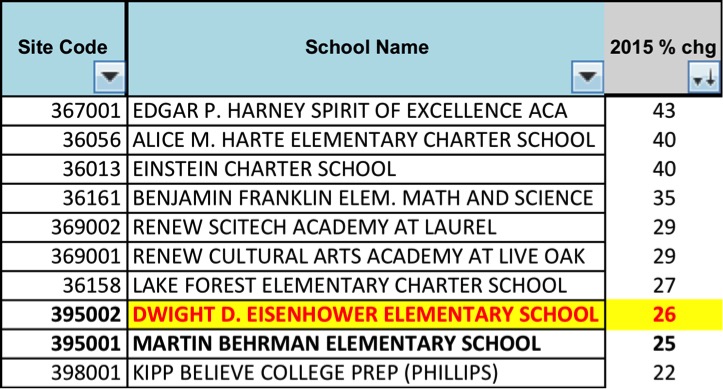 If you want more information on the program check out this blog post.

The more rigorous standards adopted by Louisiana in 2015 will require new thinking and innovations among school leaders.  Eisenhower Academy’s strategies proved to be effective at moving students forward in their progress. The strategies adopted to engage students, especially those that were formerly disengaged and below grade level clearly paid off.  The Biggest Winner Math Challenge was a central part of the strategy and served to unify the many tactics used throughout the building to increase math knowledge quickly to meet the new standards.

Deanna Rogers, principal of Eisenhower Academy during The Biggest Winner Math Challenge pilot, has moved on and is retiring from education after nearly 40 years. Her hard work, insights, and willingness to try “new think” were inspirational and encouraging to students, staff and the Ed Inquiry team that worked with her.  We hope that other school leaders will join in the excitement!