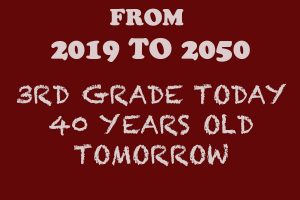 It is the first days of September 2019 and for most public school students in grades K – 12, the school year has started.  Families across the country have recently been immersed in the annual back-to-school rituals of shopping for school supplies, getting clothes ready, prepping hair, figuring out transportation and finding after school options for the school year.  For teachers the preparations may focus on refreshing wardrobe, locking down childcare, purchasing needed supplies, setting up classrooms, and staying awake for start of year professional development.

Are These the Better Times?

Parents are working to get their kids ready for school while the country is in another heavy political season where candidates demonstrate the artful act of pandering to an electorate that has become more cynical and suspicious of a government that seems to thrive off of the tribal wars of its people.  These same politicians offer no solutions to improve the lives of elementary students stuck in failing schools across the country.  All the while, the country is told that we are in the best of economic times at the same time that the homeless populations of some major cities have overwhelmed many mayors’ ability to cope and budget.  Unemployment is supposedly at record lows while the flow of desperate people trying to enter the US on the border has reached record numbers. And for many Americans the real world result of the recent “employment boom” is that instead of finding one job they now have three – all of which are needed to survive.

The ills of the country are difficult to miss now that we are in the days of an over politicized, 24/7, hyperbolic, social media addiction that is spreading vitriol and distrust.  Even foreign adversaries are following the trend, creating 280 character tweets to confuse and supplement late night comedy news summaries or the constant drone of cable news, desperate to fill its air space with anything that will attract a growing audience of the dis-affected. What was, in the past, inconceivable as normal, like weekly mass shootings or the reality show of government, has become normalized to the point of acceptance. So here we are nearly 20 years into this 21st Century.

Many baby boomers born in the mid 1950’s explosion of optimism and fertility may wonder where will the US be in 30 years  (2050) when we are half way through this century and facing the next.  Most that lived through the civil rights era of the 50s & 60s will not be around to see those days but still wonder if there will be major changes in the outcomes for students of color given that they will represent the majority enrolled in public elementary and high schools?  What will America  become when the reliance on smart machines has minimized the need for human labor, as technology improvements make automation safer, cheaper and more desirable than the human work force of today ?  How many jobs lost to machines and technology should be expected by mid century?  And what populations will receive the greatest benefit from these new opportunities? And which populations will be most negatively impacted by the loss of opportunity to robotic competitors?  What will be the source of jobs for young teens needing experience and exposure to the world of work, if even the most menial of jobs are automated.

Are We Preparing Students for the World They Will Face?

If these questions are too broad let’s zoom in on the upcoming school year, which is the foundation for the mid-century time period discussed above.  The 3rd graders today are that future generation’s leaders, workers and social victims.  The big question that plagues me, and should at least be considered by many, IS will there be any change in the trajectory of educational outcomes for our Black, Brown and rural White children THIS school year to better prepare them for a tomorrow where they will compete with highly educated global counterparts (millions of them) and will have to demonstrate an ability to deliver value beyond that of sophisticated automated highly programmed machines that don’t complain, take time off or need benefits.

In that future world, what is the perceived value of the education we are providing to our children THIS YEAR?

And will they thank us or curse us for the preparation (or lack thereof) we are giving them today?

No Sense of Urgency?

If you can read this blog do the following.

Find your state’s data on your public elementary school student outcomes.  Try this link for a start.

Look at the results by state, student group, by city, by gender, by school.  And reflect on the future described above, which is merely an extension of what already exists today.  And if you are an educator answer the following question:

It is a new school year – without a sense of urgency, radical change, real reform and double digit improvements in student proficiency outcomes –  what is the future trajectory for many of America’s children?

And some want to eliminate the programs for gifted Black and Brown kids?

Consider the Future by Looking at K-12 Education Today