During the past few years there has been a marked rise in racially charged events. The nearly monthly police shootings of black men has unleashed a national conversation about issues of race, discrimination and systemic indifference to the disparity in income and incarceration of people of color, especially African Americans. This is in stark contract to the claims in 2008 and 2009 that we have entered a “post racial” period after the election of the nation’s first Black president.

For Blacks in America, the notion of post racial is far from the daily reality. Many conversations taking place in Black churches, barber shops, restaurants, schools and neighborhoods suggest that there is in fact a new reality. We are not in post racial America. In fact we are entering a new era where race relations has become even more tense, divisive and deadly.

Too many are talking to themselves

Except for the 24/7 highly partisan cable news outlets, the conversations about race relations are often held quietly, among singular groups of peoples, discussing the racial issues of the day from a vantage point that is insular and removed from the perceptions of the major stakeholders of the debate. Blacks are generally talking among themselves and Whites are often whispering among themselves. We generally see the extremes of opinion when we watch the cable news shows that select the most outlandish and vocal voices on each side of the issue to debate, boosting TV ratings, creating more division and less focus on solutions.

But the very inconvenient truth is that in America in 2015 race matters and it is often a cause for disparity in access to educational opportunities, jobs and justice. The desire to proclaim a post racial nation after the 2008 election was wishful but naive. The racial divide debaters, even the most liberal, with laudable intentions,  (that are not African American) seem to be clueless about the impact that skin color and ethnicity have on one’s ability to live, prosper and contribute to family and society in 2015 America. Many Blacks, on a daily basis, are hopelessly confronting some form of these disparities, all too often becoming a TV spectacle whose life is casually wiped out in vivid HD .  When disparity, injustice and real life personal struggles become entertainment we should question how far have we fallen?

With that – lets look at some data: 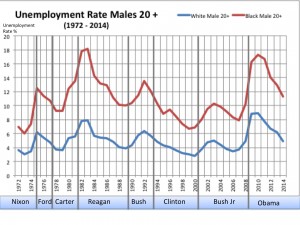 The unemployment rate from the Bureau of Labor Statistics is an often quoted measure of the economy’s health and growth.  The statistics for males 20 years or over in the graph above show the discrepancy between the White male population (blue line above) and the Black male population (red line above) from 1972 (when the statistics by race started).  We added the president in office below the graph as a reference point.

An analysis of the data, which included modeling the annual difference between these two groups, show that there is a nearly fixed ratio of one group to the other.  In fact the mathematical formula shown below can be used to accurately predict Black male unemployment (for the data geeks R Square of .93). 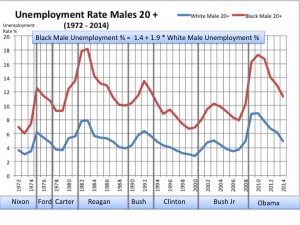 What the math shows us is that from 1972 through 2014, Black males have persistently had double the White male unemployment rate plus 1.4%.  The persistence of the ratio is worth noting. Even at the time of the lowest unemployment rate for the country during Bill Clinton’s administration, Black male unemployment was still twice that of their White counter parts.  Many in the radical right may attribute this to the lack of initiative, lack of focus on education or other systemic cultural explanations that cast the blame on the communities and people.  To many in the radical left, they might attribute this persistent disparity to the systematic discrimination that they feel remains rampant in hiring and education.  But the answers must fall some where between these polar opposite and often intractable points of view.

Is there a middle ground?

Too few are positing opinions in the middle of this debate.  There are some issues however that are irrefutable that must be considered that the data points out.  The incarceration rates for Black males remains high. The impact of incarceration is a criminal record and that record is often the barrier to any meaningful employment.  As was the case in Ferguson, where a community appeared to be living under siege by its police force, getting a criminal record was a way of life and more the norm than not. That criminal record damned the recipient to menial jobs and more likely, future incarceration.

A Huffington Post article reports that there are more African American men incarcerated in the U.S. than the total prison populations in India, Argentina, Canada, Lebanon, Japan, Germany, Finland, Israel and England combined.  Think of the impact of this mass incarceration on the communities, families and more importantly the children.  Do we fully consider the added burden on student populations traumatized by the violent indifference of a nation that is not yet prepared to have the politically difficult, politically incorrect and uncomfortable conversation about race and class.  But it is an inconvenient truth for those on either side of this debate – how much race really matters in the US in 2015.

Teens in Trouble lead to Adults in Crisis

This known discrepancy begins early in the life of many Blacks.  The formative years when learning about the world of work are the most important are often lost for many African American teens.  In periods of economic downturn and even in periods of growth, Black teens sit on the side lines, without the necessary exposure to the discipline and norms of work.  They are less likely to find jobs, especially within their  communities and definitely not outside of their communities.  The graph below shows  the unemployment rate for teens.  The red line is Black teens and the Blue line is White teens. 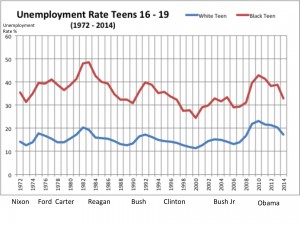 Imagine the experience of those young Black teens during the early 80s living in communities  where the unemployment rate was a staggering 18% for males 20+.  For Black teens at that time the chances of getting employment was slim to none with only 50% able to find even the most menial of jobs when compared to their White counter parts stuck at 20% unemployment.  The recent Great Recession in this Obama era was nearly as damaging.

So in isolation, as we try to encourage and engage our young students of color, we also have to understand that many are not exposed and fully aware of the future benefits of educational persistence, academic focus or college aspirations.  Solving issues of systemic neglect and cultural isolation require that the national conversation turn from political polar opposite blame games (great for TV ratings and presidential campaigns) to real dialogue on enhancing opportunities for communities throughout the country.  Although less discussed but just as important is the fact that there are many lower income whites across the country, especially in rural America, that are in the same predicament – stuck in a cycle of poverty, joblessness, jail and hopelessness.

The fact is that in 2015, race and class continues to be a barrier to opportunity and equal justice.  The inconvenient truth is that very few on either side of the political spectrum can talk openly about the issues and the possible solutions.  Even in places like post Katrina New Orleans, the flood of “so called well intentioned do gooders” that flooded the city “to help the poor Black kids” was a sore spot with long term resident teachers that felt disrespected by the cultural insensitivity at the hands of those coming in to rebuild the schools and “show them how to teach the children”.

This subject of race is complex because it touches a nerve that is sensitized even in those courageous enough to attempt the conversation.  The cultural disparities, the false perceptions, the insular beliefs, the lack of understanding and the pervasive ignorance of the cultural differences of communities block meaningful discussion.  Especially if one side of the conversation believes that they are in some way superior, albeit well meaning, with an agenda to enlighten the poor unfortunates.  The pervasiveness of this perspective is yet another inconvenient truth – rarely discussed in “mixed company.”

Hunker Down – Storms Ahead

To get past our recent history of deafening silence on the issues of race will require that we fasten our proverbial seat belts, hold on and get ready for a raucous ride.  The racial situation in America will most likely get worse before it gets better.  Pockets of frustration among the poor and the newly striving (Black and White) will confront the other without realizing that they have both been systematically ignored by a society that has gone high tech, global and increasingly narcissistic.  The inconvenient truth is that for large portions of the American population, the preferred solution by too many in positions of power is that “those people” should simply go away so America can regain its seemingly lost greatness.  For others, they believe that they can simply ignore the new onslaught of cultural variety, keeping “those others” at bay until they can move to locations where they can regain their insular existence.

Unfortunately this debate will continue to play out on the 24/7 news media channels offering few solutions but boosting ratings for advertisers while traumatizing Black children that watch as people that look like them are gunned down, with their executions replayed over and over on news shows hungry for ratings.

Let’s see if we can do the math on this one.

Here is the equation:

(Living in an unsafe neighborhood) + (limited to attending a neighborhood failing school) + (dealing with ongoing financial uncertainty due to high unemployment) + (limited exposure to the world of work as a teen) + (high incarceration rate of fathers) + (watching men that look like them shot on TV news daily – over and over)  –  – Does this not equal childhood trauma?

It is an inconvenient truth in 2015 that we know what exists but we choose to simply ignore it knowing that there are generations of American children living in terror and traumatized daily.